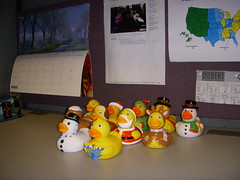 Ducks in a row
Originally uploaded by Marketeer
I know that this community isn't very active anymore, but I thought I'd share my collection of holiday rubber ducks. I think that they all came from World Market over the past several years. There were several new ducks there this year, include the Hanukah duck in the front.

I hope your holidays are just ducky!

my only duck became very broody so i bought some fertile eggs off of ebay....

thing is somthing got all but 2 of the eggs, i have no idea what did it but after that i built a little fort knocts around her which i leave open during the day.

today was the hatch date but i was giving them till tommorow (the 12th) to hatch because they were tucked under her halfway through day 1.

sadly i took a nap today becuase i have a cold... i woke up after dark to the sound of my duck fussing. another egg was gone and i found it..... it had a duckling in it ready to hatch the yolk sack torn open D:
(i cried)

well tonight was the night to give her the ducklings after dark. but i decided to start with 2 as i could bear to have them all hurt or lost. the cage i built around her is fairly snug so the babies cannot be more than 5 inches away from her.
for the most part she ignores them, if they get in front of her she like "nibbles" at them, i mean she is not hurting them but her actions to me seem like she does not want them.... and they are sitting next to not under her...and if they hear my voice they try to get out :C

so in the end my questions are:

is her nibbling at them rejection or just confusion, or just because i got her worked up? (she hates me)
have there been cases of ducks adopting other ducklings?
what are the chances of her accepeting these babies as her own?

i did NOT intend to raise these 11 ducks myself, i intended for her to do it!

I found this picture online somewhere, but it's just so cute, I had to share it.

25,000 rubber duckies will be let loose tomorrow at the Brooklyn Bridge in a race for charity (Special Olympics). I'm going to be sponsoring at least one duck ($5) and possibly a Quack Pack ($25). I hope you will consider it as well. I'm then going to go to and watch the action!

i haven't posted here in a while... but i just had to share what is going on with me these days...

last summer i took in an arthritic Pekin duck named "Three". he has a degenerative arthritic issue that is slowly taking away is mobility... sad, i know, but i am doing everything i can for him.
and then a few weeks ago i got a call to go pick up his siblings Four and Five. they were in terrible shape. especially Four who had eye infections in both eyes AND was showing the same arthritic signs as Three.

here is the original post (warning: GRAPHIC pix of an injured duck):
http://dulcamatrix.livejournal.com/72276.html#cutid1

so for the past few weeks i've been dealing with these Pekins and am glad to announce that the injuries are mostly cleared up... except for the arthritis thing... but i am working on it.
but you have to see what i did for Three...
if you don't have a good sense of humor, don't read this post:
http://dulcamatrix.livejournal.com/73507.html

To add to the cuteness Yahoo and Google have graced us with today, how about a song??

Six little ducks that I once knew
Fat ones, skinny ones, fair ones too
But the one little duck with the feather on his back
He led the others with a quack, quack, quack


My favorite version of this song is from Wee Sing. Do any of you have favorites?

My Peking Ducks are turning yellow. Like on their face, a random patch before their wing and their chests.